Shopping Cart
Your Cart is Empty
Quantity:
Subtotal
Taxes
Shipping
Total
There was an error with PayPalClick here to try again

Thank you for your business!You should be receiving an order confirmation from Paypal shortly.Exit Shopping Cart

Because of You Chihuahua Rescue is a safe haven for many unwanted, sick or neglected Chihuahuas. We receive dogs in our care that end up staying as "permanent" or "resident" dogs. These are dogs that no one wants to adopt due to age, ongoing health problems or behavioral issues.

Just because these chihuahuas are not the most desirable to place into our adoption program, does not mean that we toss them aside or not live up to our commitment to them; nor do we euthanize them. Instead, these dogs live out their lives with us, in our homes, as the responsibility of Because of You Chihuahua Rescue, Inc. for the remainder of their lives. BOYCR acts as a retirement home for these chihuahuas and maintains their care.

The "resident" dogs have become very special to us and we give them unconditional love in return. Care for these chihuahuas can be very costly but with the help of generous donors and sponsors like you, BOYCR can continue to help the "throw away" chihuahuas that would otherwise not have a chance. Please help us, help them and sponsor a resident chi today!

Donate electronically or you can mail a check directly to BOYCR!

Because Of You Chihuahua Rescue, Inc. 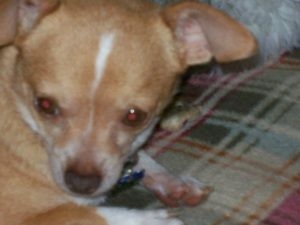 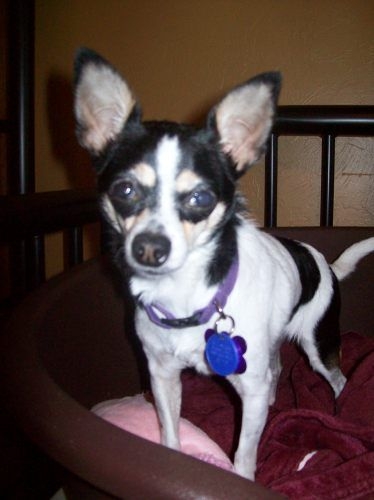 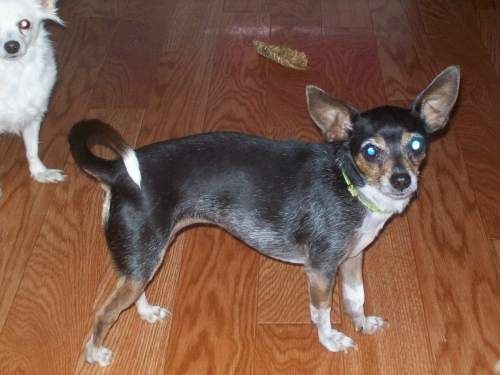 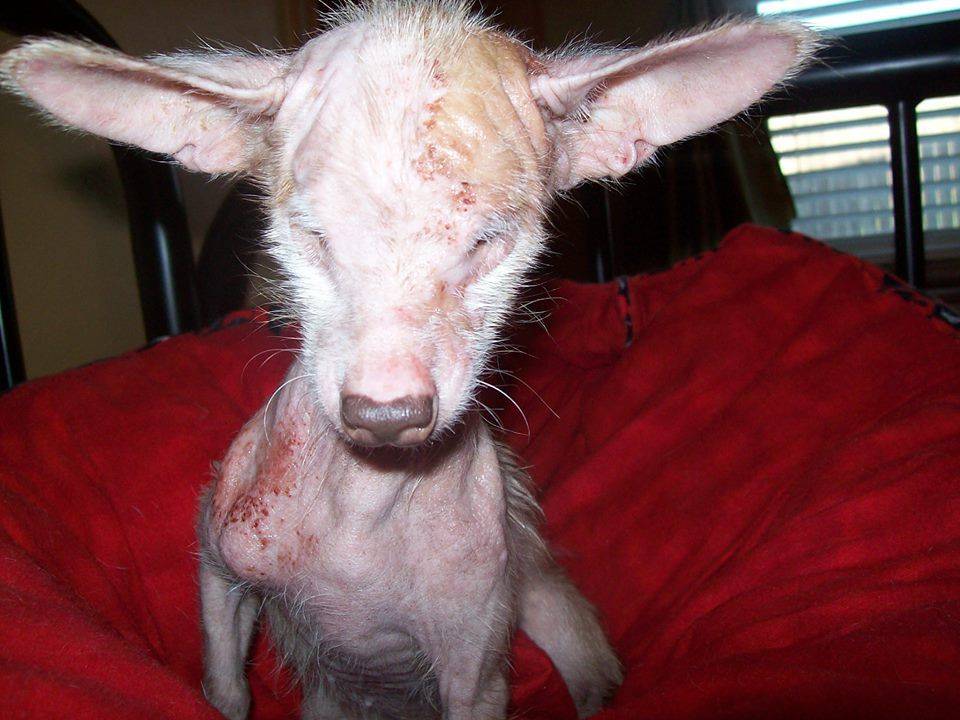 Meet Pappy. That's what he was named when they had him in the Guthrie Animal Shelter.

I have no information about him but I can tell you that whoever had him, kept him outside, since he was tick infested and when we did a tick disease test, he was positive. He has Ehrlichia. He cowers so much that they must have really been mean to him. He is such a good boy, he has learned not to mark or pee in the house, and now uses the dog door to go outside and do his business.

At first he was really afraid of the outside. I guess he was thinking I would not let him back in......

He was also extremely thin, but is now healthy and no bones show anymore!

We also found that he was positive for heartworms, but until we get his blood count up, he can not begin the treatment to rid his body of the heartworms, or we might loose him.

Now, as his bloodwork is looking better, we now have an enlarged heart and a mummer. So he is on heart meds and Lasik.

What is wrong with people that they would inflict this much pain and suffering on such a sweet little boy who just craves loving????????

He will be here with us for some time, but he will be needing a good loving INDOOR home at some point. He sleeps with me and can not get close enough. He gets along with the other foster dogs. He is no trouble at all. The shelter thought he was an old dog by the way he looked. but he was just in bad shape. BUT NO MORE!!!!!.

He has been neutered and gotten his shots, and has been microchipped. Also we have cleaned his teeth. He weighs about 7 pounds now......

If we can not find him the perfect home, he can stay here with me for the rest of his days. He deserves a happy healthy life from here on.

Pappy has had his heartworm treatment, and now there is no reason holding him back from going to a new home and living a long healthy life! He is looking for YOU

Pappy is just the sweetest dog ever, but we moved him to another foster home and he regressed, so badly, that I have brought him back here to my home. He is just so shy and beaten down, he is still afraid to go outside in the dark, and if i raise my voice about anything, he crawls on his belly to the nearest corner and cowers.

I have come to the decision that he would probably be so stressed about moving to a new home, that he would become sick again, the Ehrlichia would begin to pull him down. So I have decided to pull him from the adoption list and move him to "permanent resident " status. ALSO, I took him to the vet this past week and he has a different mummer to his heart. He takes meds for the previous mummer, but the vet thinks this new sound may be some new damage from the heartworms.

He would appreciate any donations to help with his long term care.

Pappy is a permanent resident at BOYCR. Please help us offset the costs of his care and become his sponsor today...

she was so happy to be around humans again! she is a loving dog who will be most comfortable in a home with no other dogs. She likes to be held and petted. She sleeps with me, and is pretty much house trained. she is a quiet dog, I have not noticed her ever barking.

she is 5 years old, black and white spotted. She is a small girl, who weighs about 5 pounds. Her "special needs" is that she has dry eye. and she requires a lubricant be put into her eyes 2-3 times daily. So she needs a stay at home mom, who can do that for her.

Jenny is a permanent resident at BOYCR. Please help us offset the costs of her care, and become her sponsor today...

I can paint you a picture of a female who is tri-colored, and weighing 6.6 pounds. she is approx. 5-6 years old.

This little dog was a stray, and the finder brought her to Petsmart to our adoption outreach. she was so frightened. she never stopped shaking the whole time we were there. So our volunteers held her most all day.

when I brought her home, she ran outside and stayed there for the first 24 hours. I would get her and bring her in but she would go right back out. It was nice weather so I let her adjust to me and her new home. By day three she was bonded with me and stayed in my lap every time i sat down....

She is a quiet dog. A passive dog, she is at the bottom of the pack order. she likes to sleep in my bed. she is now fully vetted and ready to find that elusive "forever home".

Since she is shy, you must be willing to be patient with her and when she bonds with you she will be your best friend for the rest of yours and her life!!!!

Graciela is a permanent resident at BOYCR. Please help us offset the costs of her care, and become her sponsor today...

Sammi is a permanent resident at BOYCR. Please help us offset the costs of her care, and become her sponsor today...